Parallel computing along with the concept of multithreading are two terms that most of the developers are afraid of and associate them with a huge amount of data races and hours and hours of debugging. However, every developer is faced with these issues at least once in their lifetime, and as with all things in life, it’s better to face the issue as soon as possible.

Having above said in mind, I will try to demystify some of the pitfalls of multithreading as well as show some interesting approaches.

So, let’s start with one of the most common cases…

Processing data in a separate thread

Let’s imagine a common situation where there is a continuous data flow that needs to be processed. Since we don’t want to occupy the main thread’s resources, the practical approach would be to separate processing into another thread. 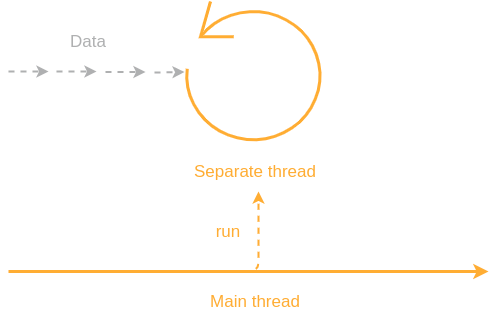 Now, how could we implement continuous processing in a separate thread’s body?

Indeed, this approach would work but it’s not so pretty as it does not really allow us to fully control the processing. If we would ever want to stop the thread from working, we would need to brutally kill it or meet a condition (that might not even exist) that would break out of the loop.

So, don’t use this approach in your code… ⛔

But, it’s not the end of the world as there is a very well known way on how to solve this challenge in a bit more sophisticated manner…

You shall not… process anymore!

Let’s improve the naive solution from the previous section…

First, we need to add the ability to control the separate thread’s behavior from the main thread. This is achievable by using simple std::atomic<bool> (or similar std::atomic_flag) variable that can be set to true or false from the parent thread. This small change already greatly improves code expressiveness and thread handling.

Play with the code on wandbox.

More power to the threads

Apart from the classical approach being shown in the previous section, thread’s behavior can be controlled in a bit more innovative way… by taking advantage of std::promises and std::futures. And… I must admit… the above example is pretty simple and, in this cruel world, source code gets more and more complex on a daily basis. Therefore, a bit more expressive solution would be preferable…

What do you think of creating a separate class which would be a base class for all our future non-blocking tasks? That would, eventually, emphasize the business logic and hide that ugly part of the thread handling.

Let’s take a look at the implementation of such a base class that I have called Thread (sounds so complicated… 😉):

First, start function is responsible for creating an instance of std::promise<void> and running the separate thread that owns std::future<void> associated with std::promise. Now, if we ever decide to move the instance of our Thread class, we will be able to stop its execution.

Furthermore, notice the try...catch block inside the stop function. First call to stop function will store the value into the shared state but every following call will result in std::future_error exception because the shared state is already storing the value. That’s why we need to protect the end-user against this behavior.

At the end, there is a run function, a pure virtual function, which needs to be implemented in each class derived from the Thread class. This function is representing the actual work which will eventually get executed in a separate thread.

Now, let’s take a look at the example of a task that should use our new Thread class:

As you might have already noticed, Thread base class has brought some expressiveness and cleanliness to the source code giving the reader ability to put the focus on the logic and not on the details related to the thread handling. is_stop_requested function is used for controlling the processing of the data in an elegant way, as opposed to the first example in this article. And now… let’s see how we can use the class above:

If you wish to experiment a bit, play with the code on wandbox.

All the code we have written above (which btw works with C++11) is great and it might work eventually, but developers tend to use standard stuff as much as they can (even though some of them always try to be smart and reinvent the wheel 🧐). They don’t want to bother themselves writing helper classes, utility functions etc. That’s where C++20 standard kicks in…

The most recent version of the C++ standard has introduced a component called: std::jthread.

std::jthread class has inherited the same general behavior from the std::thread class but it is extended with 2 additional features:

Let’s see how we can use it…

The straightforward example of std::jthread’s usage would be something like:

Check out the live demo on wandbox.

Furthermore, if we want to send the stop signal from the parent thread, we can call std::jthread::request_stop function which is similar to our custom Thread::stop function.

At the end, some of the readers may say: Hey, we haven’t joined the thread! std::terminate will get called and the program will crash! But, as you might remember from the beginning of this section, std::jthread does not have to be joined explicitly. Its destructor is implemented as:

So… with C++20, we have an easy way to stop the thread. But, what about pausing/resuming the thread? Do we need to implement it on our own? Would it be handy to have std::pause_token too? I leave answering these questions to you…

In this article, I have tried to explain a few things that can be achieved with C++11’s std::thread and its younger brother - C++20’s std::jthread. Our custom Thread class with functionalities explained above can also be implemented by using std::condition_variables and std::atomics. Do you like my approach? What’s the solution you prefer?

Let me know in the comments below… ⬇️👇

Zipping By The Longest Range

Expressiveness is what makes every developer’s life easier. Whether we read or write code, it is definitely easier if we don’t need to jump back and forth between files to get a sense of what’s the...

We have all been told that applying design patterns in our codebase is something we want to strive for. But I believe there are fewer of us who have been told what antipatterns are and how dangerou...